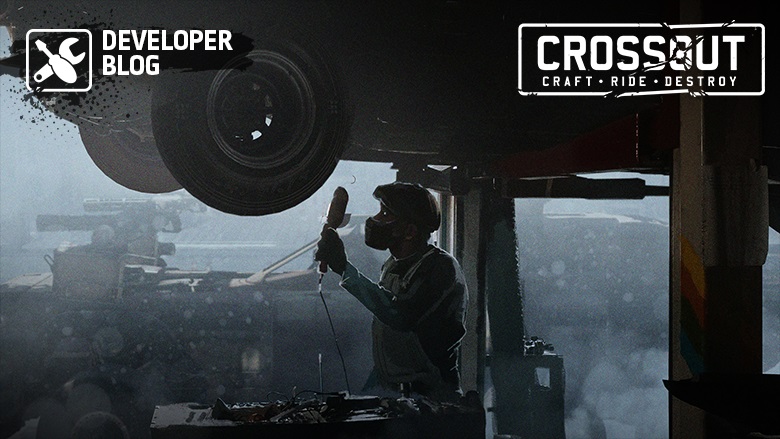 We continue to share the details of what you can expect with the start of the ninth season in Crossout. It’s time to tell you about one of the most long-awaited changes that you’ve been regularly asking us about. Today’s devblog will be devoted to the co-drivers system rework.

Please note that all co-drivers changes described in this devblog are preliminary. It’s possible that the final version of this mechanic, which will be presented in the update, will receive a number of additional changes. In this devblog, we will discuss only our current plans.

Let’s start with the fact that the co-drivers system will be completely redesigned. We took the maximum amount of comments and suggestions from the players into account, and we are working on turning this mechanic with doubtful benefits into an important part of the game.

We will abandon the current list of co-drivers and present you with new characters. Each of them will have their own personal card, where you will be able to see the co-driver’s skills, additional information and their visual appearance. A certain number of co-drivers will be available at the start, and their list may be expanded in the future.

In the current system, the skills of co-drivers rarely affect the outcome of the battle. Among them, only a few really useful bonuses can be distinguished, and in order to receive them, the co-driver must reach his maximum level. The new system will change this situation.

Our main goal is to make each co-driver useful for certain kinds of armoured vehicles and to give them specific roles on the battlefield. Long-range combat enthusiasts will definitely be interested in choosing “Sniper”, and thanks to a co-driver codenamed “Rogue”, the fans of close-range battles will become even more dangerous while they are being close to their enemies.

Each co-driver will have several passive skills that will improve your armoured car’s parts in one way or another. They can include: a bonus to weapon rotation speed, reduced spread, increased projectile speed, increase in mass limit and tonnage, increased radius of explosions or flame puddles, and much more. There will also be a “tank” co-driver, and all his skills will be aimed at providing maximum survivability on the battlefield. 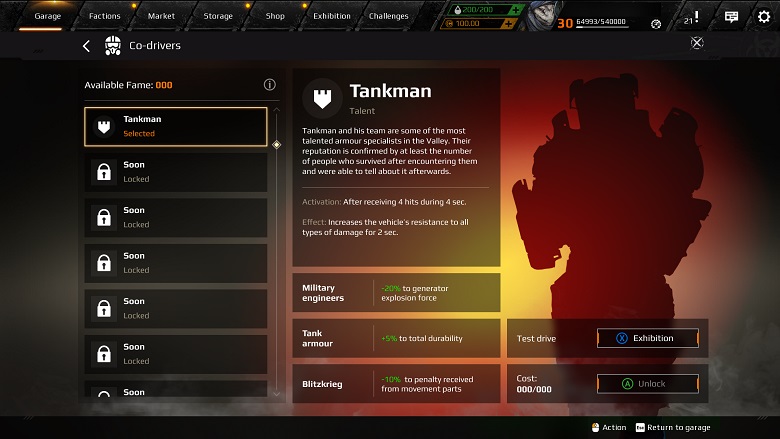 In addition to useful passive skills, each co-driver will have their own “talent”. In order to activate it, you will need to perform certain actions. One of the co-drivers, for example, will be able to increase the damage you deal to the enemy for a certain time and highlight the weak spots on the enemy’s car. To activate this talent, you will need to hold your crosshairs on the enemy for a certain time. And the other co-driver will be able to restore the durability of their car by collecting the remains of destroyed enemies.

Of course, the skills that are listed here are not final and may be changed several times before we are ready to present the final version to you. But, we think that you have caught the essence of future changes and how the right co-driver can affect the course of the battle.

With the new system, there will be no need to level up a co-driver to get the next skill. Each co-driver with all his skills will be purchased for “glory points” (this name may be changed later). Glory points will be earned in every battle. Just by playing the game, you will gradually be able to accumulate the required number of points and unlock the next co-driver of your choice. After you have unlocked a co-driver, all his skills immediately become available to you.

Will there be some kind of compensation for old co-drivers and the resources spent on them?

Of course! We will take all the unlocked levels of all your co-drivers into account and issue a corresponding amount of glory points. You can use these points to unlock new co-drivers.

When will we be able to try out this new system?

We will definitely launch a test server where everyone will be able to try out the new co-drivers. After this testing, you will be able to share your feedback, thoughts and comments with us. We will additionally inform you when the test server is going to be open to everyone.

That’s all for today! In the next devblogs, we will continue to show you new parts of the season and talk about other features planned for the next major update.