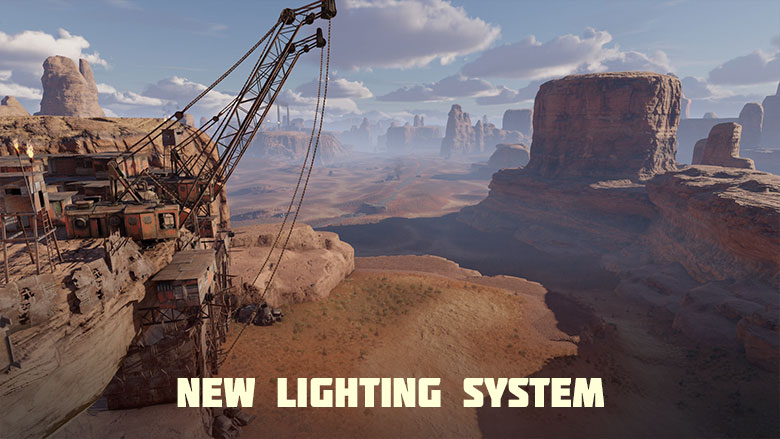 In Crossout 0.10.20 we are planning to rework the lighting system in the game. The changes will allow realizing realistic effects of dispersion of sun rays in the atmosphere, the position of the clouds and their illumination will be close to real, and the colour and brightness of the Sun in the game will correspond to the time of day when the battle between the players takes place.

Now it will be possible to even more expressively reflect such weather conditions as, for example, fog, the intensity of which will vary depending on the relief, smog, sandstorm, etc.

In the future, the rework will also allow us to change the time of day and weather conditions in the locations.

We present to you several screenshots showing the difference between the current lighting system and its new version:

Now the brightness values and the law of attenuation of light sources are close to real.

Dynamic sky with physical atmospheric scattering simulates the dispersion of sunlight in the layers of the atmosphere. Thus, we get aerial perspective (a layer of air in front of distant objects), realistic sky blue and realistic colour and brightness of the sun for different times of the day in locations.

The sky, clouds, and atmospheric effects on maps work in tandem in a unified system that depends on time, humidity and other conditions.

Layered (height) fog has high density in the lowlands, and gradually weakens at elevations. Now, by setting its different density and height, you can easily imitate humid air (fog over water), haze (smog, gas pollution), sandstorm, and so on.