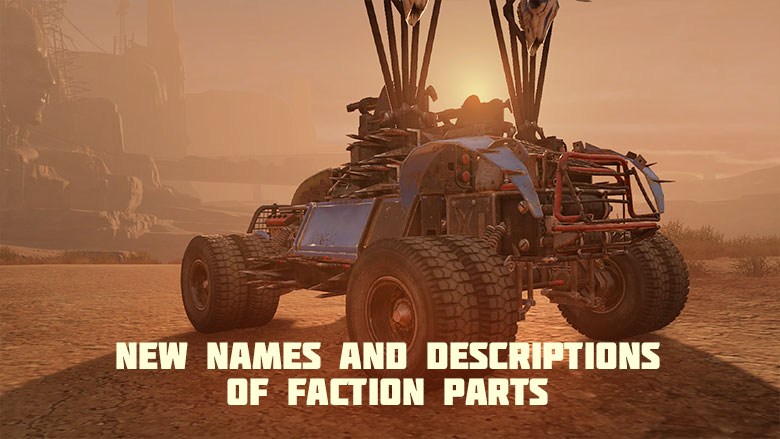 Hello survivors! As you may have noticed, on December 20, the names and descriptions of radiators and coolers changed:

These changes are the first in a series of future reworks of item names and descriptions. Crossout tells a story, and item texts are one way to do this. Almost all of the items in the game belong to one of the factions, and all the names will be reworked accordingly. We try to make it so that by the name of the item you can immediately tell which faction it belongs to, and its description reveals a part of the game world. 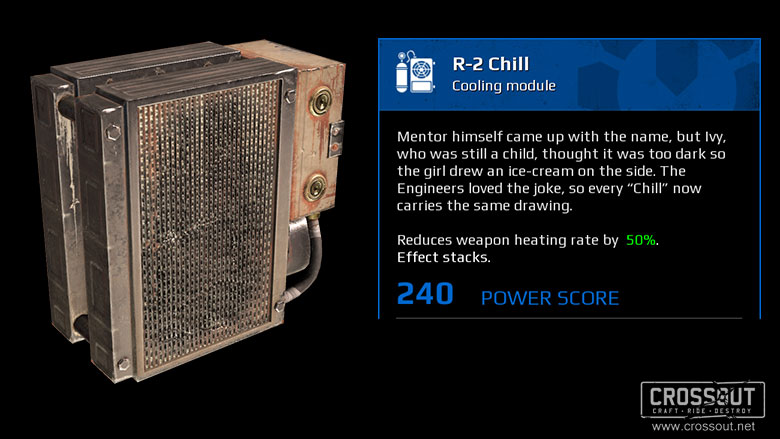 For example, in one of the upcoming changes we will remove abbreviations and numbers from the Lunatic names:

What is the reason? The Lunatics at their core are madmen and criminals. It is hard to imagine that they would think about abbreviations and numerical designations of their parts. For them, it is much more important that the names are short and easy to remember. (PS The name “Druzhba 2” will remain the same: we would like to hear your opinion of the reasons in the comments). For the same reason, their cooler is called “Shiver”. Can you imagine Psycho Pete talking to his mechanic: “Excuse me, mister, would you be so kind as to install an improved cooler on my armoured vehicle”? Of course not! He will say: “Slap on the Shiver, man!” If a new Lunatic cooler appears, its name will also refer to the unpleasant sensations of cold (for example, “Frostbite” or something else — we'd like to hear your versions!)

On the other hand, the Engineers are moderately disciplined guys. They take technology from all sources, and it is important for them to observe a certain order in abbreviations and numerical designations. And they choose the names based on the item's properties. A radiator? “Breeze”! Colder? “Chill”! And the third Engineer radiator, if it appears, will definitely have the prefix P-3, and its name will be associated with extreme cold — for example, “Grimcold”. But the cooler (or, in other words, the cooling system — CO) is a different kind of equipment, and the Mentor called it based on the memories of his turbulent youth. The next Engineer weapon cooler? Oimyakon, Magadan, Svalbard — got any ideas? 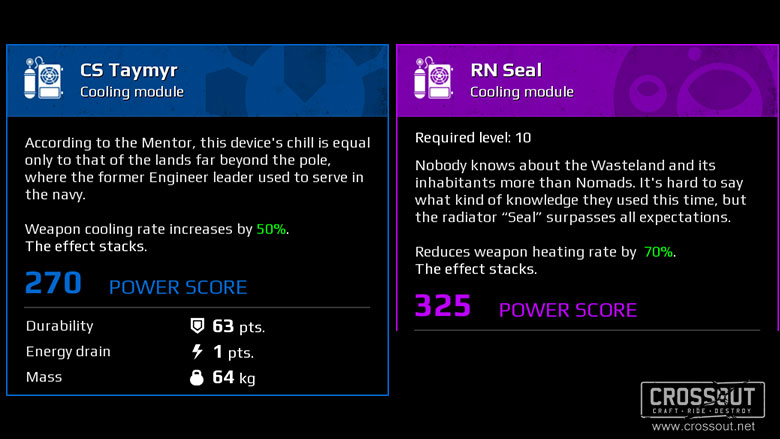 Nomads are among the few who pay attention to the world around them. In their wanderings, they observe the preserved wild nature and use the acquired knowledge in their technology. That is why so many of their parts are named after animals: for example, the engine “Cheetah” (fast animal), the drone “MD-3 Owl” (flying predator) or the radiator system “RN Seal” (northern beast).

The changes will be gradual so that the players have time to get used to the new names and not be confused. In addition, the changes will affect items without personal names among the first: generators, radars, radar detectors, other equipment and, last but not least, wheels. We are not going to change the names of items that everyone already knows: “Harvesters” will remain “Harvesters”, and “Hurricanes” -will be “Hurricanes”.

Our ultimate goal is to make item texts form the image of the factions to which they belong and help you better understand the world of Crossout. It is important to observe the continuity of the names and their logical system in order to create a clear picture of what is happening. Making the immersion in the game world more interesting is as important a task as providing exciting gameplay, and we are working in both these directions.