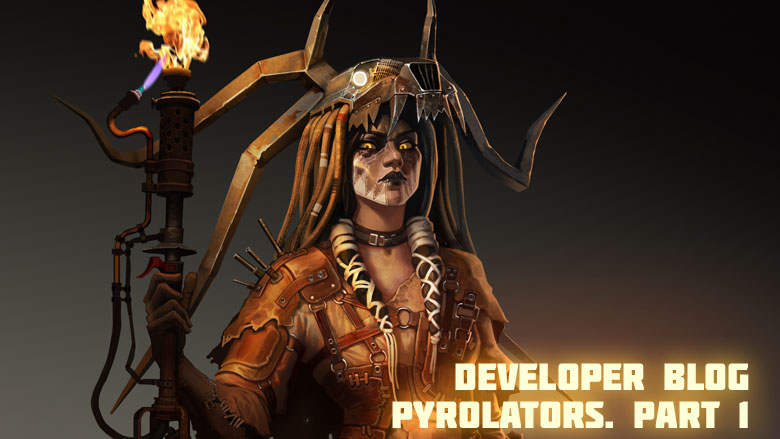 The day is approaching when the mysterious Pyrolators faction will open the gates of their garages and begin recruiting volunteers who want to understand otherworldly secrets or simply share their passion for fire and destruction.

Pyrolators are the second game faction included in the Khaganate. It is they who give orders to the half-mad raiders from Khan and make sure they are followed. And to be listened to, they must frighten even the Lunatics, be crazier and more dangerous than them.

Every Pyrolator creates and maintains his story, just as the shamans of the past sewed their own costumes. Many build their reputation on mysticism and connections with the supernatural, but some rely only on strength and cruelty.

It is vitally important for the members of the faction to be not only effective fighters, but also to look spectacular. Therefore, bright frightening colors, formidable shapes and loud sounds come into play.

Territorially, the Pyrolators, like the Lunatics, came from the west, crossing the Red Rocks. To manage units, they have to move a lot, so their machines are aimed at both speed and long trips.

When Khan began to unite the numerous gangs, he faced the problem of ideological unity among the half-crazed raiders. He had to find something that everyone would fear more than death. Instead of inventing something new, he turned to witches, sorcerers and other psychics already existing in the mass consciousness (and newly appeared in wastelands after the disaster).

He personally met with several of them and made an offer to everyone, which was impossible to refuse. Thus began to form a caste, responsible for ideological work with the masses.

So that every survivor could assess and test the upcoming innovations as early as possible, we are preparing an in-game event. While it's active, Survivors will have access to a special mission called ‘Hot Spot’, where they can get a unique temporary resource: lighters. But remember that this resource can be earned only within the framework of a special mission!

It is reported that one of the craftsmen of the Pyrolators, ready to give access to some special parts in exchange for lighters and resources that are so important to him will briefly appear in the Wasteland. We advise you to take a closer look at his proposals, because the craftsman is extremely open and honest. You give him valuable resources for continuing experiments, he gives you the desired item from his assortment, among which are: Pay attention to the original design of the wheels. It emphasizes the acuity of sensations when driving. The faster you go, the more it hurts for those hit by the spikes! Each installed wheel reduces cabin power. That's all for today. But even more information about the new faction is just around the corner! We'll see you in the next parts of the Developer Blog!