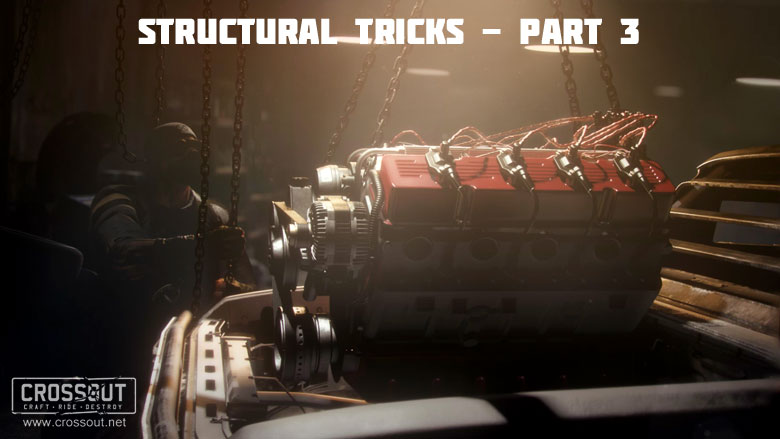 Hello to everyone who survived! The motto of our game is ‘Craft! Ride! Destroy!’ — and the ‘Craft!’ part here is the most important, since the better your vehicle is assembled, the better it's going to perform in battle. Today, we continue sharing the intricacies of mechanized warfare with you!

Trick seven: my module is my castle!

Different modules are used in warhorses of most players: these may be coolers, radiators, engines and other modules. In fact, you can use them not only for their intended purpose — they can serve as additional armor, because some of them have very decent structure.

In this case, a V8 engine provides additional 323 structure for protection from the front and a cooler and a radiator give more than 200 structure to the back.

This method is not only suitable for small cabins such as Buggy. Many vehicles, including large ones, have other places requiring special protection — ammo packs and generators. If they are not hidden under the cabin (not enough space, or you didn't feel like it) for some reason, they need to be protected as well as possible. And this is where strong and useful modules help you out once again. 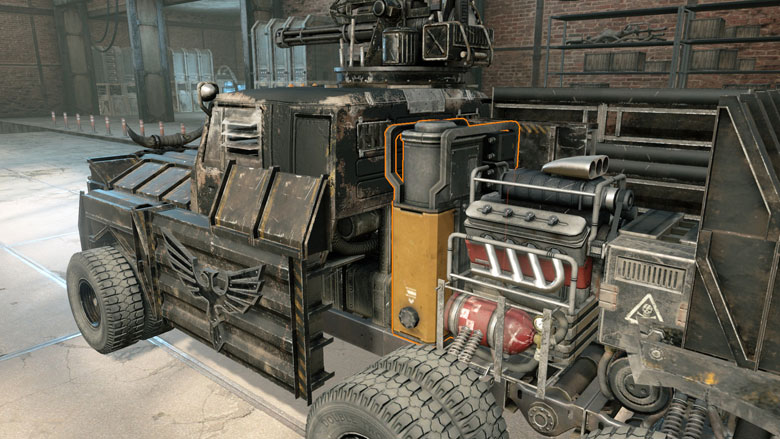 This way you can always get extra armor ─ just use this simple technique.

Similarly, some weapons can serve as an excellent protection for the cabin. In particular this applies to heavy weapons, such as cannons. For example, a turret cannon of epic rarity level has 484 structure. If you put it in front of the cabin, then the enemy will have to work very hard before he breaks through this ‘armour’. 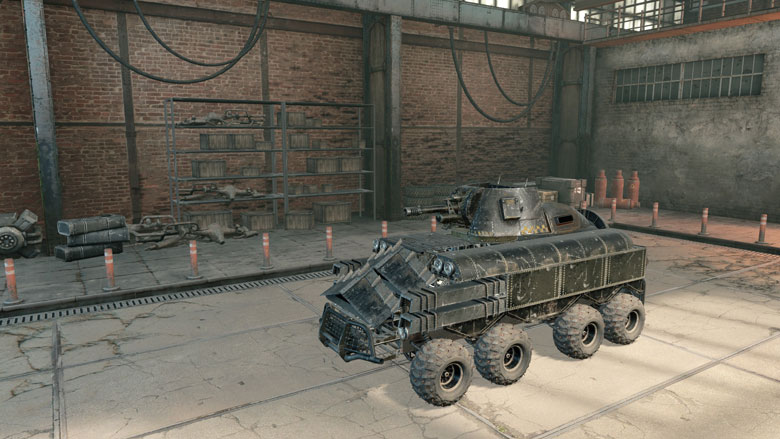 Here you can see a small armored car with 1000 structure. The protruding part of the ‘Wyvern’ cabin is protected by an 88 mm cannon from the front — the side, where the most damage is usually dealt. Thus, in this example, a weapon almost doubles frontal protection.

Trick eight: do not let your weapons stare at the sky!

When a rookie driver builds his next vehicle, he often wonders where to mount the weapons. With the pickup cabin players without further ado mount the guns on the bonnet or roof of the cab. In general, this is not a wrong approach. A large number of attachment points is the pickup cabin's feature, which should be utilised. But there is one caveat: if two weapons are standing next to each other, there is a high probability that they will interfere with each other when you aim at something  to your left or right. 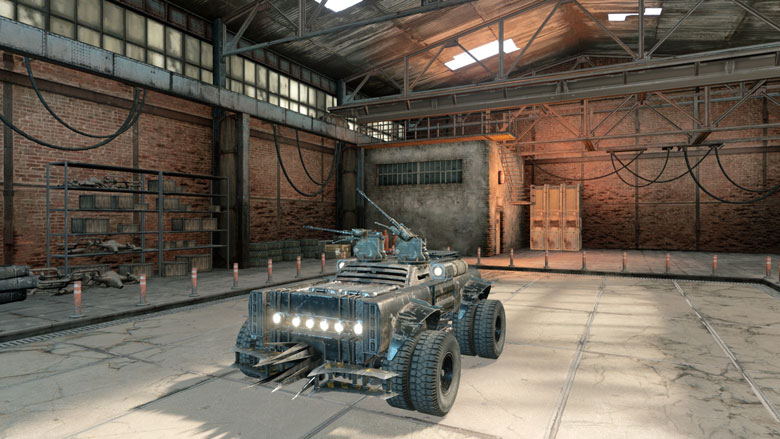 In this screenshot you can see that the right autocannon looks where it should be, while the left one somehow stares at the sky. This is due to the proximity of their placement. As a result, when you pull the trigger, the projectile from the left autocannon is not going to go where you would want it to: 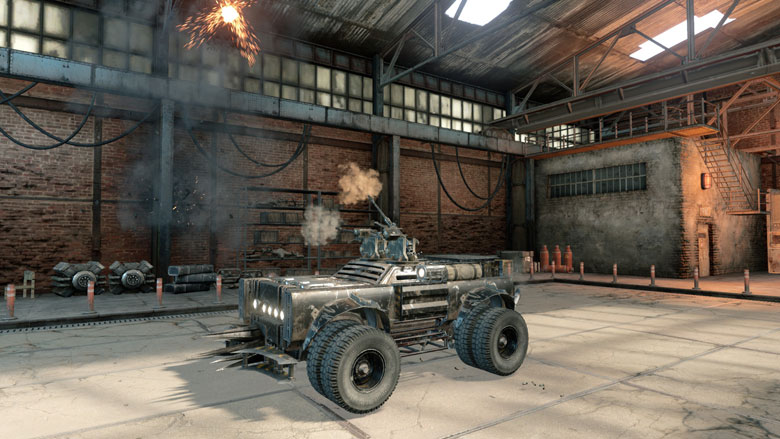 In the following screenshot, we see a different version of the same vehicle where this problem is solved by mounting the autocannons in different spots: one — on the bonnet, the other — on the cab roof. 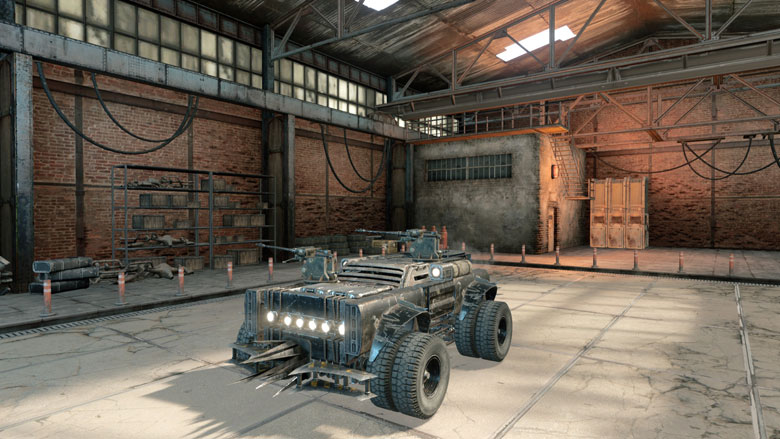 And with such an arrangement the autocannons, of course, will shoot exactly where you want: 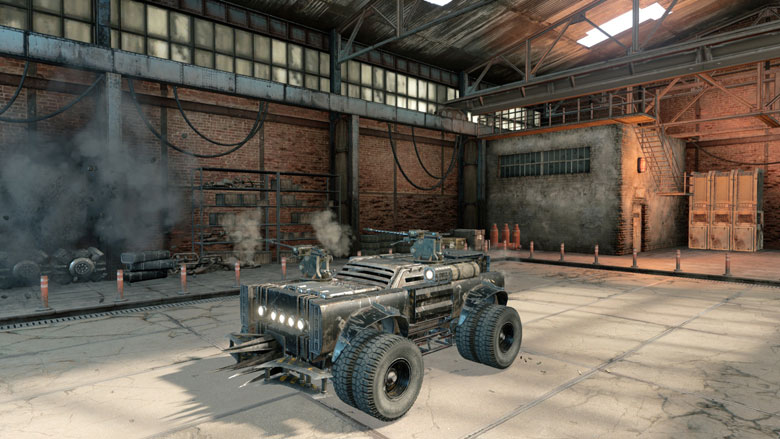 In the very first trick we already noted that it is a very common tactic in Crossout to destroy the enemy's weapons. Every experienced player first seeks to disarm his opponent, and only then finishes him with relative impunity. However, since the weapon itself has quite high structure numbers it is easier to shoot off the part that the weapon is mounted on. Therefore, when creating your car you need to intelligently approach weapon placement in order not to become unarmed.

Firstly, the gun should be located at the largest possible number of parts. So, even if there's just one part below the gun, it's not going to fall off. Secondly, the weapon should be installed on grilles (since they are difficult to shoot as damage passes through them) or the cabin (whose destruction is equal to the of the destruction of the entire vehicle). For example:

In this case, the gun is standing on as many as four parts: scavenger wall, two lunatic grilles and the ‘Wyvern’ cabin. Also, try to place weapons in different spots, so that the enemy can't destroy everything with a single burst.

That's all for now. However, THERE'S MORE TO FOLLOW...