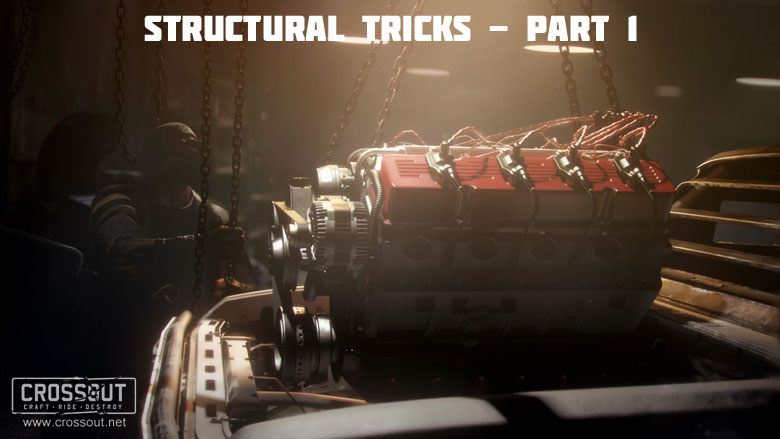 Hello to everyone who survived! The motto of our game is ‘Craft! Ride! Destroy!’, and the ‘Craft!’ part here is the most important, since the better your vehicle is assembled, the better it's going to perform in battle. Today we are going to reveal a few tricks to our rookie drivers on how to improve combat capability of their armoured vehicles.

Trick One: speed versus accuracy

When building an armoured vehicle you should understand that gameplay in Crossout has many unusual features. One of these features is shooting off parts, including weapons. In most cases during a battle players try to disarm the enemies first.

Which brings us to a logical conclusion: there's no reason in building a very sturdy vehicle, if your weapons are fragile. You can assemble a real tank with about 1500-2000 points in structure and equip it with 2 or 3 ‘Wasp’ course rocket launchers, with 48 structure points each. However, the first enemy with machine guns dealing only 100-150 damage can disarm you which basically makes you helpless until the end of the game. A much better idea would be to mount a couple of ‘Wasp’ launchers on a small but nimble vehicle — though it won't have so many structure points, the car's mobility increases its vitality just as well as armor — if enemies can't hit your car, it's going to live longer. Also note that it's a lot more difficult to shoot off a fast car's weapons — simply because it's hard to hit.

Remember: a small, but mobile car can be very strong in the right hands.

Often, a new player wants to improve a vehicle's structure as much as possible, and for that he decorates it with all kinds of available parts.

Before you do the same, you should know that matchmaking in Crossout counts your PS — power score, which depends on each individual vehicle you build. That is, players of any level can end up in one battle against a player of any other level.

All those extra parts that allow the player to add as so much structure have a certain PS and in total give a decent PS increase to your freshly-built ‘tank’, and matchmaking puts it in a match with strong and experienced opponents.

Therefore, when you finish building your war-horse, always test and refine it. Does it lack mobility? Can it end up unarmed, while still nearly intact? Haven't you gone too far with cab or chassis survivability? You can always use a more durable weapon or remove clutter.

An armoured vehicle isn't called this way for nothing — it needs armor. Otherwise, it's going to be destroyed very quickly. The simplest and most common type of armor is a thick part (like nomad plane panels, scavenger walls, engineer rear doors), and on top of it a grille from lunatics. It's best if every part is attached not to one but to several parts. The red grilles on the screenshot are arranged horizontally, while the green panels beneath them — vertically. Thus, the four parts are attached to each other to provide greater structural strength.

Bumpers provide very good protection for the front. Do not forget about them!

That's all for today. However, THERE'S MORE TO FOLLOW...