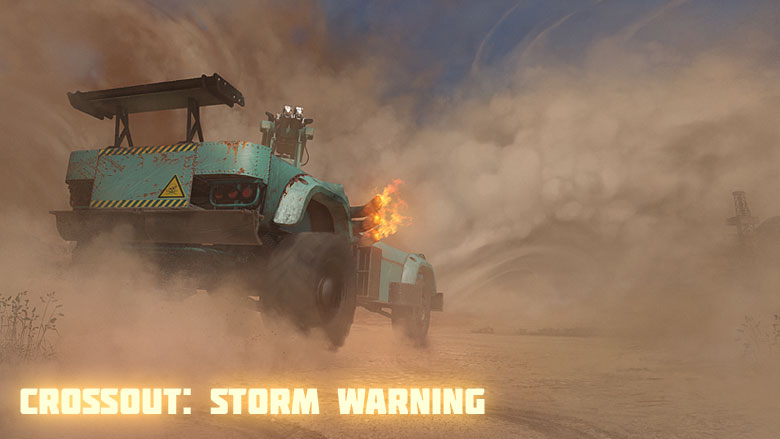 Dust storms are amongst the many curiosities of the new world. Many associate their appearance with a man named Bran. Even before the disaster, he organized pit fighting, which then escalated into a bloody massacres in a huge coliseum. Bran accumulated a huge treasure from the blood of fighters and betting on them. The end was also bloody: the gladiators revolted, killed the guards and literally tore the tyrant himself into pieces.

But this is only heard in rumours and stories, since survived the coliseum that day. The whole city crumbled down upon everyone who was there, mostrous tornadoes raged in its place for weeks. When the wind settled, there was no trace of the people, structures and treasure.

Since then, when the wind starts to blow, carrying grains of grey dust, people hide in their homes and trucks. But those who can't live without risk test their luck in the deadly arena.

This is how the new game mode came to be in the Crossout universe!

Storm Warning is a new PvP mode, which should please those not in favour of team spirit. Each participant of the battle fights for himself and against everyone else. Battles take place on familiar maps, but there are no enemy bases. To win the battle you need to be the last man standing on the battlefield. There are no friends, only enemies. Battles are complicated by the fact that a terrible storm is slowly and inexorably consuming the map. If you get caught in the storm, you die.

It’s hard to survive, but winning is both profitable and honourable. Any one to survive the deadly battle will be rewarded with in-game coins! You can use them to rent workshops for the production of more sophisticated weapons or spend them on the market to buy the right parts for your armoured vehicle.

Not everyone can get into the new mode. You will have to pay a small amount of coins for the right to take part in battle. The stakes are high, but it is worth noting that the losers do not lose the durability of their components, so you should always test your luck on your best creations.

In the next Blog we will tell you about PvP missions in the game.