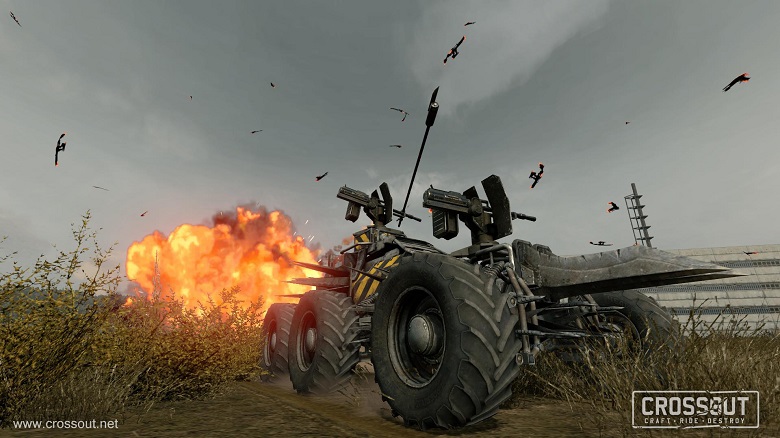 Developers will continue to share their diary entries, we’ve been telling about Factions lately, now that you know about Engineers and Lunatics it is time to find out more about other Factions like Traders and Scavengers. 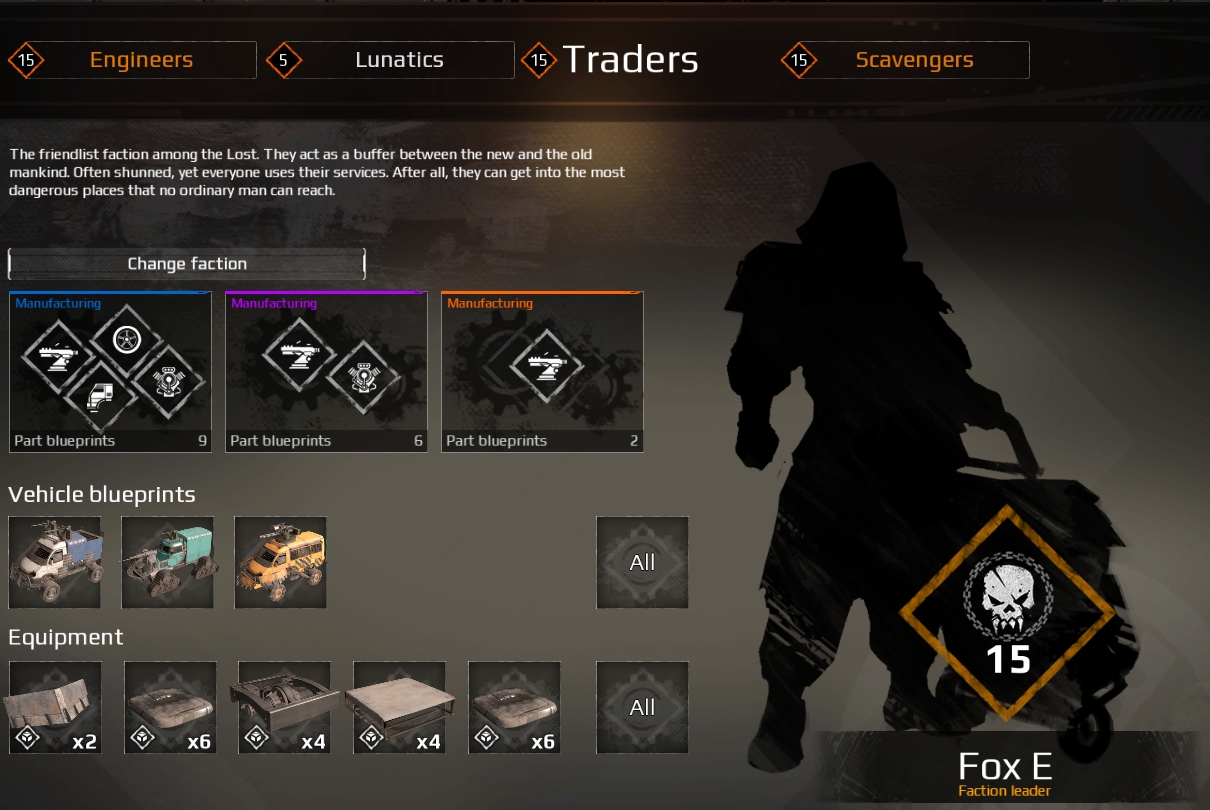 The most neutral faction of all. It serves as a buffer between the new humanity and the old one. Often shunned, yet everyone uses their services. After all, they can get into the most dangerous places that no ordinary man can reach. These people have changed enough to start hiding their faces with masks. Their personalities have also changed, as well as their perception of the world and the ability to communicate with the world on the more ephemeral levels. These peculiarities allow traders to feel safer in anomalous zones. The nature of these anomalies is not even known to every changed one, not to mention ordinary people. Those of the few changed who managed to grasp the nature and mechanics of anomalies, are not too eager to share this information. The only thing known for sure is that anything that can help to keep them alive will be changed.

By improving standing with them you unlock these parts:

Their vehicles, engineered for maximal payload and survivability are known for their hazardous and deadly weapons.

Their equipment is obvious at distance, they are avoided by normal survivors.

Their weaponry and hardware is as advanced as their machinery, by gaining access to the latter you may craft rare, epic and even legendary parts.

The trader faction is for those people who appreciate not only the power, but also the appearance of the vehicle. 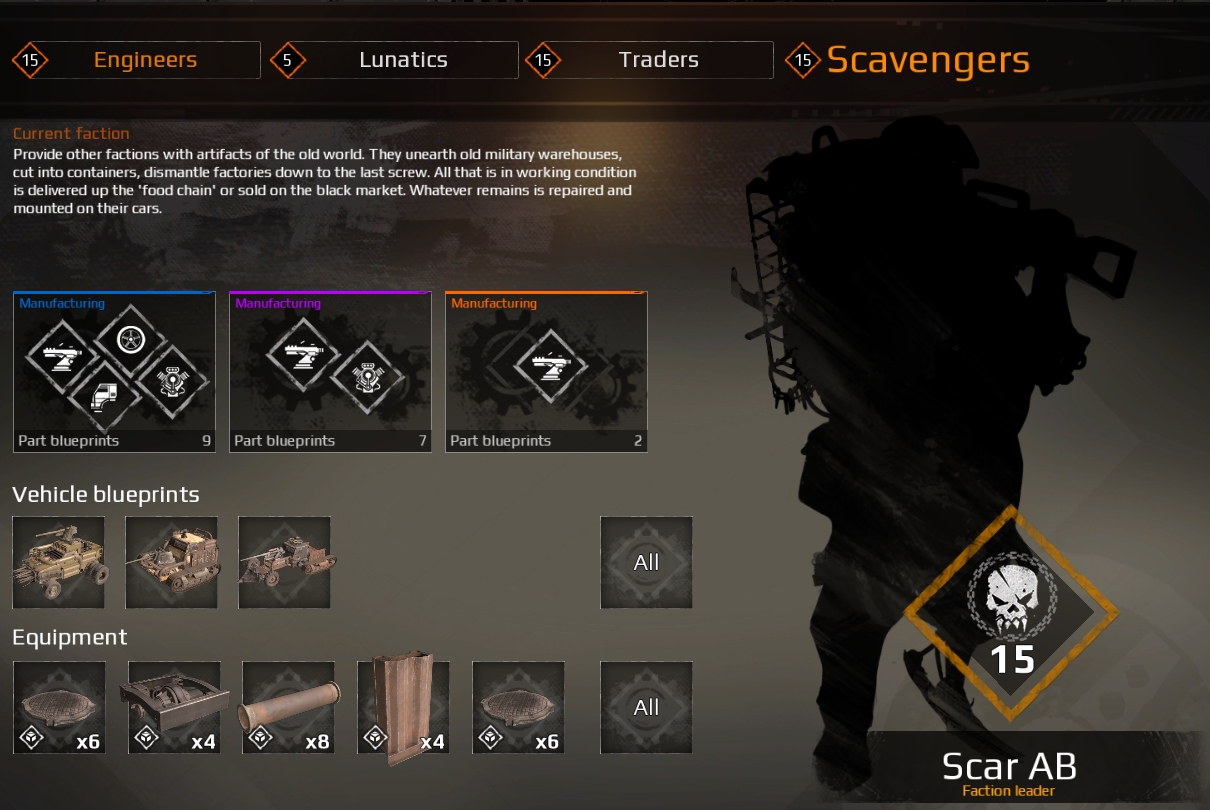 Their name describes them perfectly. These guys grabbing everything what isn’t nailed down, even if it is nailed down, they rip it as best they can and drag it along. Old warehouses and plants are their favourite haunts, this is where they fish out old-world equipment from the rivers, leaving containers and casings for themselves. If it works - they don’t bother with how old it is. Utilising old heavy-duty equipment in their rides they makes everything extremely tough.

Good looks and fashion don’t interest them however. Don’t think that they consciously ruin what’s left untouched, they carefully transport it to some warehouse in mint condition for other faction elites to buy it, but that is more of an exception, for in the world of Crossout everything is on high demand.

After getting close to them they reward you with these:

Having to transport expensive gear safely, they’ve learned to never sacrifice armour for anything, thus they put layers of protection on everything to reach maximal defence.

This faction will not create low-level parts for you. If scavengers create something, the will not waste their time on standard things. They will create rare, epic or legendary parts or weapons for you.

Send your questions to the developers about the factions and get the answers to the most important ones. Note that your questions should be constructive and clear.

Those who have submitted the most interesting questions will receive invitations to the Crossout Battle Test!​

"If you change faction after a while, and join another faction, for example I've lvled up with Lunatics to lvl 10 and i want to join Traders, will the progress made with Lunatics be lost? Or it will be saved so next time i switch factions i can start where i left?"

After choosing another faction to join all the reputation points earned in the previous one are saved for the future. A player doesn't lose them.

Can I join join a faction, create those unique parts of that faction and ditch them for another one and repeat the procedure?

Yes, you can create the parts at the workbench as many times as you wish while it is rented.

Do you plan to add a tasks for reputation boost?

Would each faction have their own colors and symbol? Cause I was thinking of you guys adding some sort of flag or decal to put on your vehicle to distinguish from everyone else, maybe some smoke trails or chant.

Factions already have unique parts style and paints. We believe that flags will be perferct for smaller communities which are going to be added to the game in the nearest future.

Are there going to be Faction specific battles? In a way that the scavengers have to protect a convoy while getting attacked by the lunatics, for example? And are there going to be parts of the maps that can only be reached with certain parts? like an are with heavy radiation or toxic gases that can only be exedded by vehicles with airtight cabins or steep hills that only tracked vehicles can climb? That would, if balanced correctly, allow for large amounts of strategic depth.

We have been thinking about this idea and we believe that it might have a lot of potential. We would like to implement it as the development goes.

Can you use parts and blue prints from a faction other than the one you are a member of?

Yes, after earning the blueprints a player is free to use them no matter what.

Is it possible to obtain such a high reputation level that the chance of obtaining rare components would reach 100%?

Upon reaching levels above the maximum in any faction players receive special containers as rewards. Each holds one item from rare up to legendary level. What exactly the player gets from each container is decided by fate.

Discuss on the Forums