How “Sinto city” was created

Intense battles have been fought in “Sinto city” for a month now, and you might be interested to know how we created this map. In addition, using this article, you will be able to understand the main processes that make up the development of any new location in Crossout. Let’s go!

The creation of any map consists of two main parts — a gameplay layout and a narrative component. The layout is the pure geometry of the map: the general landscape and large objects — buildings, bridges, etc. The narrative is expressed in everything else — in signs, destroyed objects, colour scheme, weather.

When creating a layout, we always try to make it so that the final location has opportunities for playing on different types of armoured vehicles — from maneuverable cars with melee weapons to artillery, armed with “Mandrakes”.

Various approaches can be used in creating the initial concept of the map. The approach that is most commonly used and convenient for a level designer is creating a concept out of a gameplay idea. Whether it’s a system of interactive objects (as in the “Ravagers foothold”) or a certain designer’s technique for creating a map (the radial scheme used in “Crater” or the eight-shaped layout of “Bridge”). With this approach, the designer faces an understandable and clear task with a minimum of restrictions for its implementation — to create a map layout, the main feature or element of which is the idea itself.

However, there are other options too. For example, if we want to make a map in a particular visual design, the map’s layout is created taking this into account. This means that the resulting layout must be implemented in a predetermined environment and has to work according to its rules. For example, if the map is intended to be the place of a meteor crash, it must have a crater, which, in turn, must be correctly implemented in the gameplay model.

It’s worth noting that the two approaches described are just an example, and we don’t always fully stick to just one of them. While creating “Sinto city” we used a sort of symbiosis of these two techniques.

When choosing the theme of the story, that is, the setting of the map, we had no doubts — the Syndicate has loudly asserted itself in the Valley, and “Sinto city” expands his story. Neon illumination that is still working, characteristic buildings and other visual features of the map — all this clearly indicates that this territory belongs to the “dragons”. 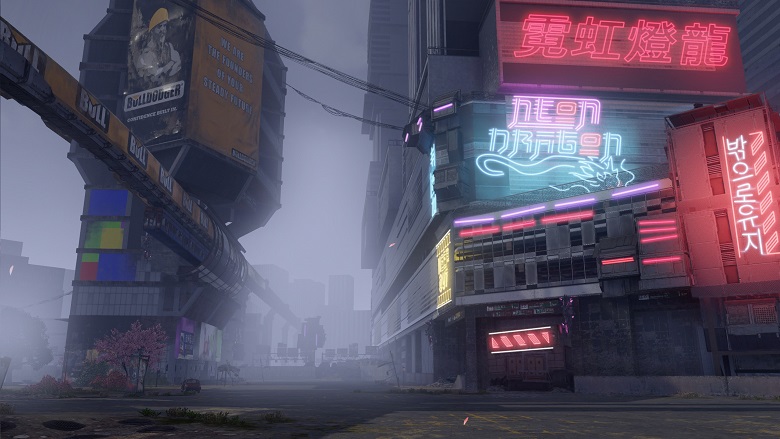 In addition, we had a huge desire to tell more about the world of Crossout, and this time we decided to focus on its past. We see the consequences of the disaster in many locations, but the landscape there is too severely changed because of the constant battles. With the appearance of the Syndicate, we had the opportunity to introduce the locations that survivors hadn’t reached before during fierce battles for resources. This is how “East quarter” and our “Sinto city” were created — the cradle of the corporation, to which the members of the Syndicate once belonged, decided to take positions in their home place. The faction has accumulated interesting resources for the survivors in Sinto city, and there are rumors that something incredible is stored in the warehouse under the overpass.

But don’t forget that in addition to creative tasks, the development of a map also sets a number of applied tasks. The main challenge for us was to make this map unique, but at the same time comfortable for all types of armoured vehicles. We wanted to do something that will be interesting for everyone, and so that there are no players who would be disappointed, because their favorite gameplay variation is too difficult to be used in “Sinto city”.

A separate and very important task was the blocking of the direct path from the respawn point of one team to the respawn point of another. The need for this is motivated by our desire to avoid the traditional motion of the vehicles in circles, but in such a way that the outskirts of the map are still useful and have their own points of interest.

And that’s all for today! We hope you like the map as much as we do. It’s time to return to the game and win on the narrow streets and wide overpasses of “Sinto city”!