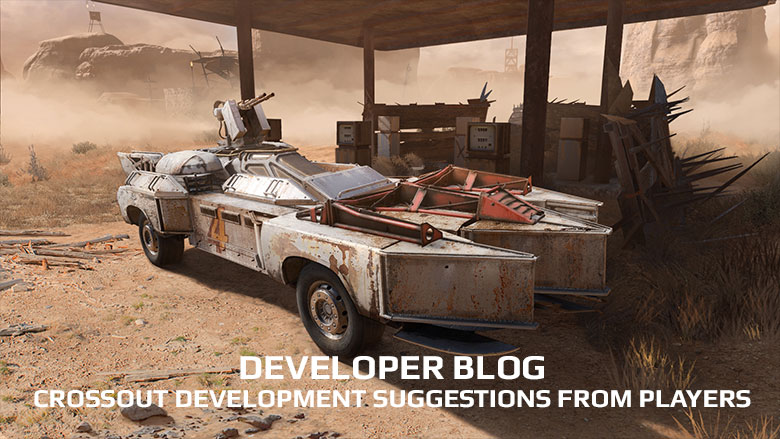 Greetings to all inhabitants of the Wasteland! Today we are opening a new series of “Developer blogs”, dedicated to the ideas and suggestions received from you!

We would like to start with changes related to the “personal file of the survivor”. Almost immediately after the launch of this feature in the game, players asked us to add the option to hide their profile. This option required quite a lengthy optimization process, and we are pleased to inform you that we plan to include it in one of the upcoming updates!

The next option, which will also soon appear in the game, will be the option to highlight and “block” a specific part in your warehouse. This will help avoid situations where a particular part was accidentally sold or used in crafting.

We continue to improve various aspects of the game exhibition and we are already finishing work on the feature proposed by the players — advanced search filters.

At the moment, using the “can build” filter, you can only see crafts that you have all the required parts for. Soon you will be able to choose armoured vehicles at the exhibition for which you have a base, weapons or chassis, and replace the remaining elements with your own options. 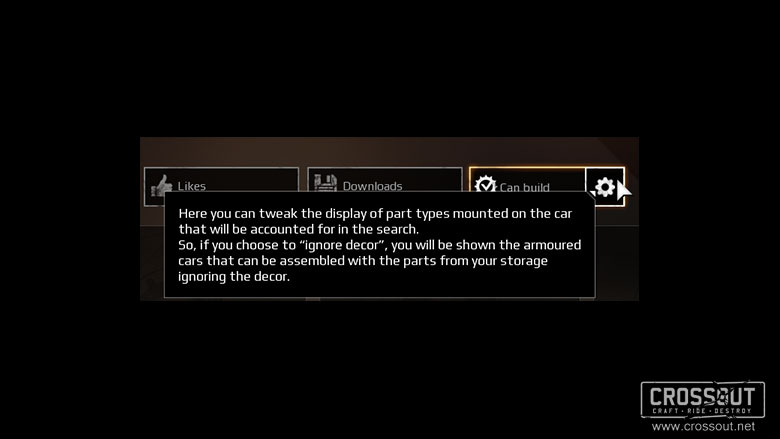 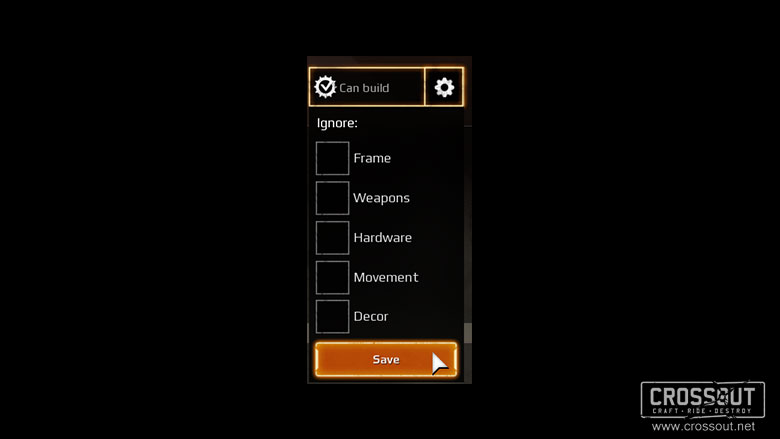 Thus, if you activate the filter and select the item “weapons” and “appearance customization”, the exhibition will show all armoured vehicles that can be fully assembled, as well as those blueprints for which there are not enough weapons or paint/ stickers.

Changes will also affect the weapons, in particular, the revolver “Corvo”. Now, various additional modules installed on your armoured vehicle will directly affect its reload speed. Moreover, these changes will affect not only the reloading indicator but also the animation and sound effects for the revolver itself.

The following suggestions have been tabled with the development team:

From the moment combat drones appeared in Crossout, we received a large number of suggestions concerning both various changes and the complete reworks of their mechanics. So, one of the ideas was to add 2 modes of action to drones — the first one, automatic, would be similar to the current mechanics of drones. The second mode implied manual controls. For example, the player indicated a specific target and the drone concentrated fire only on it. When the target was destroyed, the player could choose a new target or change the mode of operation.

In the early stages of drone development, we considered various options for the mechanics for this weapon. In the near future, we have no plans to change the principles of their work, but now this idea is being actively discussed and it is quite possible that we will return to it later.

Another proposal was devoted to the processing of the “Invasion” mode. The idea was that after the timer expired, the player deserved a victory, not a defeat. An alternative was presented — to completely eliminate the timer from the mode.

We are currently working on improving this mode, and are looking for various ways to improve the game experience in the “Invasion”. Such changes directly affect the key mechanics of the mode, so for any such revisions, it can take quite a long time. As part of previous updates, we gradually changed the mechanics of other raids and, based on these changes, we plan to rework Invasion in the future.

We also regularly receive suggestions for reworking the gaming market, including the option to exchange coins and parts, as well as donate them to your friends.

We have no plans for such changes. Anonymity in the market ensures fairness of transactions conducted there and is generally useful for trading in an ever-changing trading platform. Moreover, current mechanics provide additional protection against potential fraud. We also strongly recommend that you enable the 2-step authentication for your game account — this way you can stop any attempts by intruders to gain access to your account.

We remind you that you can share your ideas and suggestions in a special section on our forum.