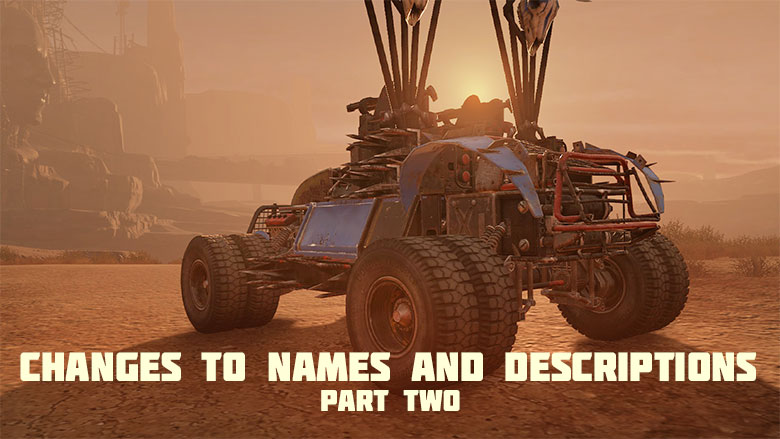 Hello survivors! In the upcoming patch, we are planning new changes in the names and descriptions of parts. These changes will be much bigger than the last ones (with radiators and coolers, remember?), And we decided to tell you about them in advance.

We are moving towards our main goal — ensuring that the names and descriptions of the parts form the image of each game faction, and each player can determine who produced any of the parts simply by looking at the name. In addition, we want every part in the game to have both a technical and an artistic description. This will help everyone to get to know the world of the game better, and beginners will be able to understand the variety of parts presented in the Crossout better. 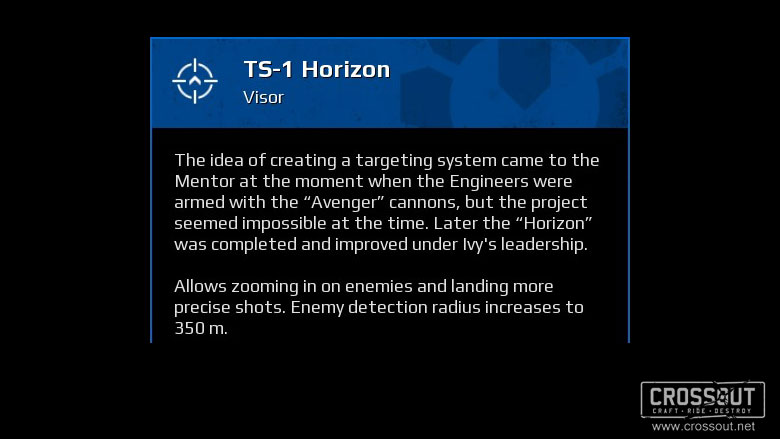 Cabin names were not changed. But their descriptions have been tweaked to a standard form — with a lore part and a technical part, and technical descriptions now correspond to the actual characteristics of the cabin. This is unlikely to help the veterans of the game, but it will certainly be useful for beginners. 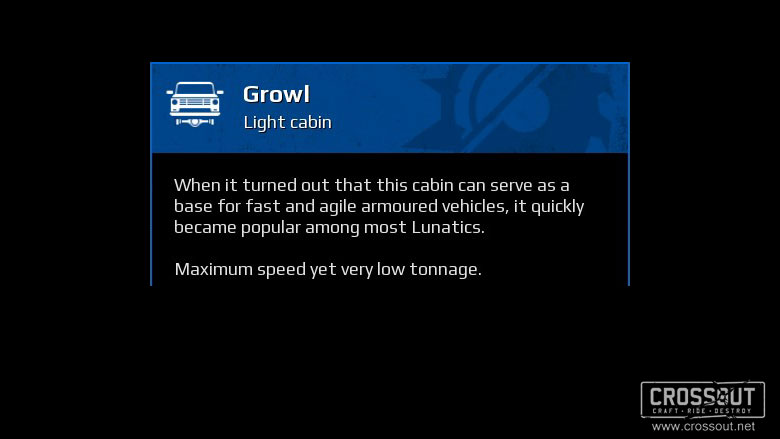 Most of the equipment available in the game has received new names. We took into account the factional features, and also — in the descriptions of the items — told you a few short stories about the game world and the main characters.

Generators
Generators can be made with Lunatics, Nomads and Scavengers. When developing new names, we thought not only about making them fit into the general semantic row of a faction. It's also very important for us that people can call their equipment the way we call it. For this reason, for example, the colloquial “Big G” and “Gasgen” by the Lunatics appeared in the game. 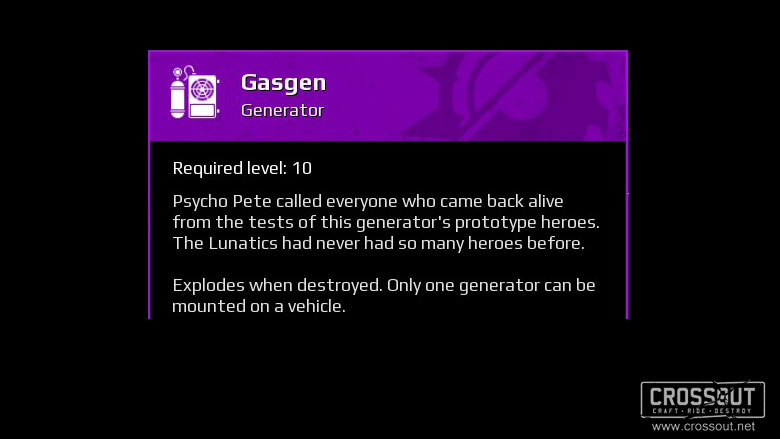 Radars
For Scavengers, who are always in search of something valuable, the radar is an important tool for a comfortable existence in the vicinity of the Sepulchre. And, since these are just tools, Scar's underlings did not have to suffer with the names for a long time. 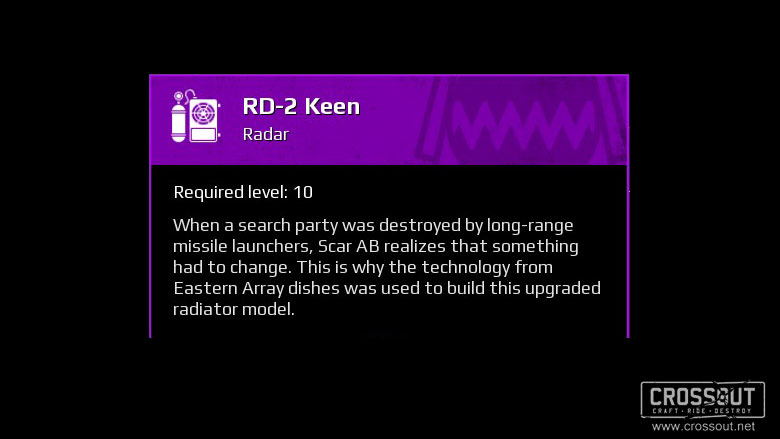 Radar-detectors
Radar-detectors are the invention of Nomads who seek to make their stay in the Wasteland more quiet and safe. Dawn's Children have participated in the creation of these high-tech devices — hence the names that bring back memories of ancient science.

Boosters
Some people like to catch up, others want to run, so boosters always have their fans. In the new part descriptions, we tried to show what inspired faction engineers to create such equipment, and reveal the important characters in our world through them. 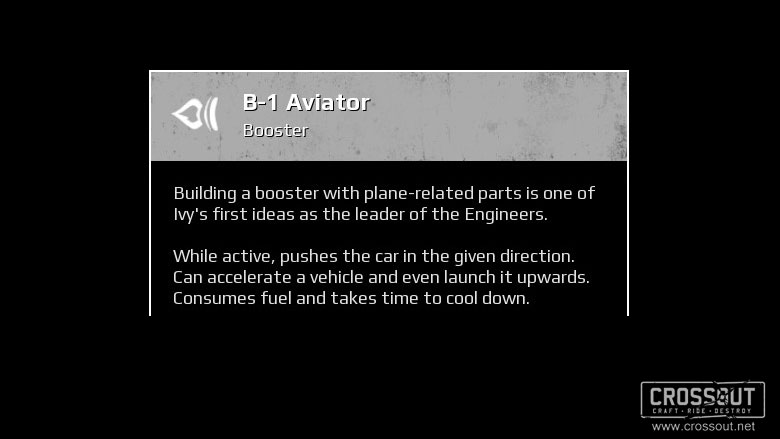 Ammunition and fuel tanks
Due to the simplicity and obviousness of their function, we decided not to change the names of the parts in these categories. There isn't a faction in Crossout that is so romantic as to give special names to fuel tanks or crates.

Engines
The engines in the Crossout are based on real prototypes. We left the names untouched, but the descriptions now correspond to the images. Thanks to the community for detecting the inconsistencies! We will continue to listen to your comments and feedback about the texts in the game.

Surely many of you wondered where the Lunatics found a weapon called “Lancelot”, so we will tell you this story. In addition, we changed the name of the Lunatics' first melee weapon: now it is a simple “Boom”. 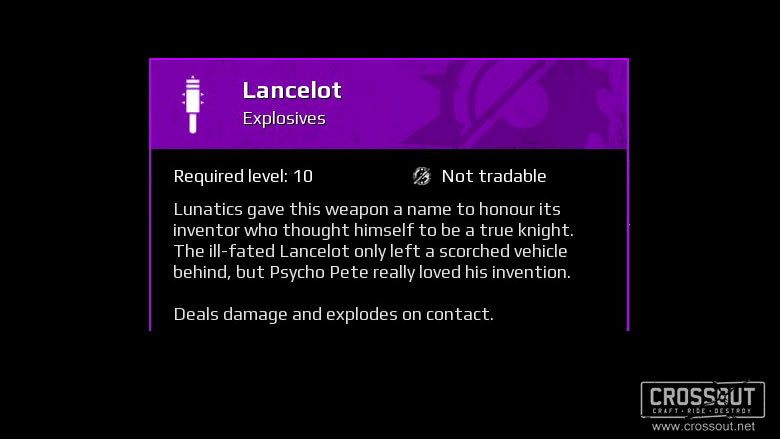 Our work with the names and descriptions of items is not done: not all the parts are in proper form, and not all categories have been covered. We will be glad to hear your wishes and suggestions.

Naturally, a large-scale change of texts is far from the only thing that awaits you in the upcoming update. Follow the news on the website!