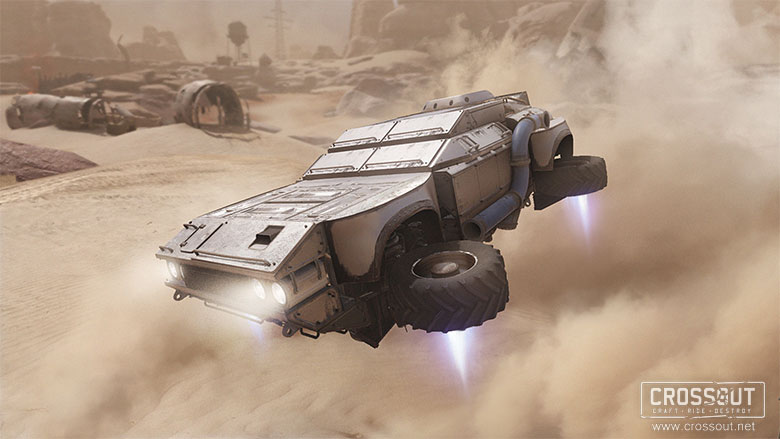 Survivors! Today we would like to share updated information on changes in hover mechanics. But first, we would like to thank once again everyone who took an active part in the first test and shared constructive opinions in a special thread on the forum. We analyzed the combat data, tried to take into account a number of your comments and now we offer you to take part in the second test of the updated hovers. Please note that upon logging into the test server each player will be given 4 hovers “Icarus VII”. After the test's conclusion, these hovers will not be transferred to your account on the live server.

We are still planning to remove the limit, thanks to which, in case of installing more than 4 hovers, the power of each of them is significantly reduced. Without this limitation, you can install more hovers on your armoured car. Now each installed hover, like all other movement parts, will reduce the cabin's power by a certain value. The more hovers you install, the less chance that your craft will be immobilized, but at the same time, the reduction in power and, accordingly, acceleration is felt more strongly. You can compensate for this by installing a cabin with more power or an engine that significantly increases it. Please note that the effectiveness of armoured vehicles with hovers will directly depend on the power of the used cabin. In case you missed the first mass testing of updated havers, you can always read more detailed information about our plans in this news.

What has been changed?

The tonnage boost of both hovers is planned to remain the same as well as durability parameters applied during the first testing.

So let's summarize what has changed since the first mass test:

Mass testing of the updated changes is scheduled to begin today. Test your craft with updated hovers, build different crafts on hovers with different cabins/engines and different PS values. We also recommend testing hovers on crafts with low-power and low-PS cabins and on crafts with high-PS cabins and powerful engines, and then compare the results. You can see the schedule and instructions for logging into the test server HERE.