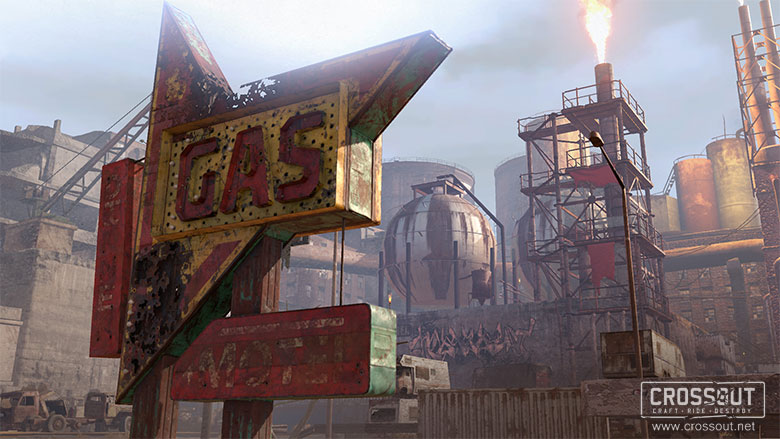 A man with his hands tied behind his back was sitting on a chair. He didn't look well. His clothes have long become tattered and crusted with blood, dust and sweat. Long, greasy hair, mud on the face, a bruise under the eye. Most of all he looked like a doll — broken, twisted, abandoned. The only detail that did not fit into the image of a Wasteland tramp, was the eyes. When he raised his head during a conversation, you'd recoil involuntarily — at the bottom of the dark, almost black eyes, there was blind fear and... insanity?

Rupert sighed heavily. He never has been good at questioning. The formal position of the settlement's sheriff (and where did this title come from?) obliged him to organize a system of self-defence and emergency response, not conduct investigations. He knew that in the old world before crossout, this was done by specially trained people, who had been learning for years how to “pull” the necessary information from people. Alas, there was no one with such skills in their settlement, so Rupert had to do that as well.

— So let's start with simple questions. Again. Name?
The prisoner curled his lips and shuddered.
— Why did you detain me? How did I cross you? I really, really need to leave. Do you understand? Leave now! Go far away! — notes of hysteria have appeared in the tramp's voice.

Rupert winced. This dummy stumbled out from the sort of friendly neighbouring settlement, which was five days of travel to the west. The tramp tried to run away, but could barely drag his feet because of exhaustion. When the mobile patrol moved towards him, he took refuge in the hills near the road but stumbled and dropped into the dust. The guys said that when they were loading him into the transport, the tramp whimpered and howled, asked “not to do this to him” or “just kill him”. And Rupert would understand if the patrolmen just let the crazy bastard go. Who knows how many psychos are roaming the world? But the thing is that there was no news for a week from the neighbouring settlement. Not a single car, not a single person. It's not like there was a bustling trade route between the settlements. Not at all. But the complete absence of anyone at all suggested certain thoughts. Rupert hoped that the tramp would tell him at least some news, would give at least one clue to make the picture clearer. But the reality, as it happens in the new world, disagreed with the expectations and wishes of others.

The tramp spent the first couple of hours hiding in the corner of a rusty container, which was used as a prison cell for the most violent in the settlement. Just sitting and shaking like a leaf in the wind. As if waiting for something. Then, apparently having made sure that they were not going to do anything terrible, he relaxed. But every attempt to talk ended the same: “I need to leave, let me go”. And Rupert has grown tired of this. In the end, he is just the sheriff of a small settlement, not some sort of renowned interrogator.

— Back to square one then, — Rupert said thoughtfully. He did not know how to make the tramp talk. A sudden idea lit up in his head. — Here's what we're gonna do. If you don’t answer my questions and tell what you saw in that settlement, you won’t go anywhere. Never. We'll put you in a cage, and you're gonna sit there until the old world rises from the ashes.

After that, the tramp nearly fell off his chair. He started shaking again, hastily looked around, tried to get up, but forgot about his hands tied to the chair with plastic ties. Madness in his eyes reached a truly universal scale, and then the tramp spoke.

— You want to know? Fine, I'll tell you, I'll tell you.
— So, your name?..
— To hell with my name! Listen, sheriff, listen. They came to your neighbours. The collectors.
— The collectors, right. And what do they collect?
— People. They came at night. Surrounded the settlement. Those who tried to resist were killed on the spot. And then they started dragging people into their trucks. When they were done, each person became... Not a damn thing was left of them! A husk, a doll, a shell! It moves, walks, breathes, eats, but there's nothing left from the person in this husk, do you understand?! All of them, absolutely all your neighbours are now just brainless dolls! They were all taken away!
Rupert was growing bored with every word and came to realize that this guy was crazy.
— Yeah right. So the collectors took everyone away and... turned them into dolls, right?
— That's right!
— And how did you manage to escape?
The prisoner hunched over in the chair, as far as the plastic ties let him.
— I'm a coward. I ran. I hid when they came to my house. I heard them take away my wife and daughter, heard them screaming. And then I saw them! Saw them as I see you! They did not recognize me, did not hear me, as if I was a blank spot as if I did not exist! They stumbled around like stupid animals, without a single emotion on their faces! I shouted at them, called them!
— And what happened next?
— After the collectors processed everyone through their vans, it's like people ceased to exist for them. They were just... forgotten. These husks they turned the people into, were standing on the spot, idly. Then… Then something happened, I didn't see it. Someone accidentally hit someone, people started yelling. A fight broke out, a full-blown brawl. They rushed at each other foaming at the mouth, tore each other to pieces...
Rupert sighed. It all started sounding even more like a tall tale.
— And how long did it last?
Then the captive jumped with such force that the metal legs of the chair, screwed to the floor, broke. The tramp nearly hit Rupert in the stomach with his head, but the sheriff dodged, and the lunatic collapsed to the floor, continuing to yell from down there:
— Until most of them died! Those who survived fled, howling like rusty gears! They were laughing and crying at the same time!

The sheriff was fearfully looking at the captive's twisted face, saw splashes of saliva flying out of his mouth with every shout. “The tramp has gone completely mad. Just a little bit more, and his mouth's gonna start foaming” — was his belated thought. Rupert called the guards, and the prisoner was dragged into his cell-container. The sheriff's deputy entered the cell.
— Well, did he talk?
The head of the settlement’s self-defence force spat with annoyance.
— Damn psycho. Talked about some collectors stealing minds and souls... Raving lunatic. But we haven't heard from the neighbours for a week. So get a couple of cars ready tomorrow. Let's go and take a look.
The deputy nodded.

The night was windy. The sand was blowing with the heated air, rustling along the hilltops surrounding the settlement. Sentries on chip stone walls could only curse their fate, which led them precisely to this shift.

Cars came from the west almost silently. Bulky vans that could hide anything in their bellies. They were unusual, odd, different from most machinery that can be found in the Wasteland: different shapes, contours of the body. As if they were not built by humans... or not quite humans. They had something completely alien compared to the ordinary vehicles of the new world.

The sentries didn't even know what hit them. Almost silent shots, muffled groans, and no one who could raise the alarm was left on the walls. The collector vans were approaching.

The tramp hurried in the cage from an old naval container. He managed to steal a piece of wire during the interrogation, and now he was frantically picking the lock with an improvised lockpick. He could feel it — the collectors were close. They're coming. They're almost here. So he had to run. Quick and quiet, like last time. This settlement will delay them for a while. By morning, everyone here will become husks. And he's gonna be far away.

The lock clicked, the cage opened. The settlement's gate collapsed from the impact of the collector vans. The tramp glanced toward the noise and darted away.