Answers to important questions from players 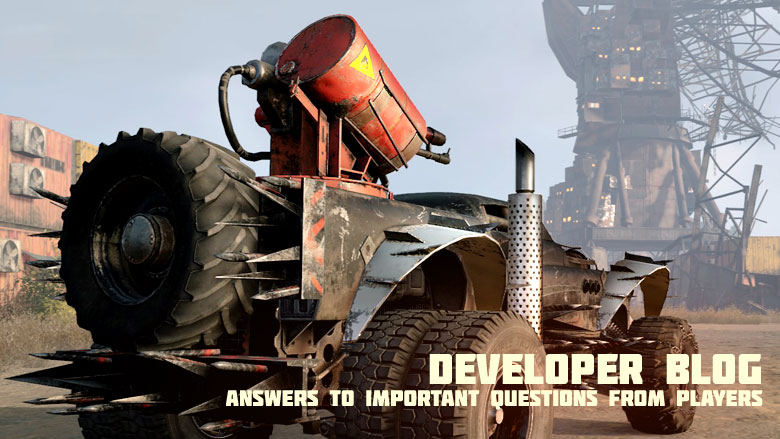 our game was released very recently, and its development has just begun. We are receiving a significant amount of feedback from players, and we would like to clarify some of the issues that have been raised the most.

One of the important and unusual aspects of our game is its economy. In the early stages of development, we tried different ideas: from boosters with a set of random parts, to vehicle parts that were completely destructible in battle. In the end, after a lengthy period where we collected a lot of data and suggestions from players, we settled on the current model. We ventured to do something unusual, something rare in games that can not simply be copied from somewhere else: a model where the demand and the prices of items is formed by players themselves. This does not give us any special advantages, but adds a whole range of gaming activities related to trading in the market, and therefore makes the game more profound and diverse.

As in real economy, a crisis of overproduction may sometimes happen in the game, where there is an overabundance of one particular resource or another. The price for it in this case drops almost to zero, and we need to decide how to once again increase its value for the players. There are few options: to make the resource more in demand,  to reduce its inflow, or to completely exclude the resource from the game. Choosing the right option is a very difficult task. Sometimes there are distortions, but we immediately correct our mistakes, and draw conclusions for the future. Now we try to change parameters slightly and by smaller values.

We know about the problem when experienced players arm light vehicles and engage in combat with rookies. This problem has several solutions, one of which — separating beginners from experienced players and not allowing them to meet in battle — is already in the game. In addition, we are tweaking weapon PS in order to more accurately match the real strength of weapons, and finally, we plan to revise the PS of structural parts in the future, since weapons have more influence on the outcome of the battle than armour with the same PS.

As for the need to see out each battle to the end. In the early stages of testing, we received numerous complaints that many players quit the battle early, not waiting for the end of the battle and even in the destruction of their own car, despite having received only minor damage. This frustrated many players who were determined to fight to the end. It's foolish to take the opportunity to leave the fight from the player, and we left the decision up to them, but we decided not to give a reward to players who left before the end of a battle. We want to note that battles are swift, so waiting for the end of a fight was never too long.

We want to reserve the right to change the recipes of items. This is necessary to more accurately balance the demand for all items in the game, as well as for introducing new items and embedding them in the craft tree. We promise not to do this often and not to change recipes too much.

One of the recent changes that caused a lot of questions was the change in the composition of containers issued during time spent in the game. We want to note that this was never ‘loot’, because players did not need to use any effort to obtain it, the real ‘loot’ and experience is found in battles and as a reward for performing daily and seasonal assignments. Containers were supposed to be just a pleasant bonus. But it turned out that the items from such containers had a very negative effect on the economy: the creation of many rare items had become unprofitable, because they were sold on the market cheaper than the cost of their ingredients and production. We decided to change the contents of the containers in such a way that they drop interesting items, but do not affect the economy as much. We want to note that the contents of containers are not final, and we will think about changing them so that containers become more valuable to players.

Let us reiterate that the game is in a stage of active growth, it lives and develops together with you. We study all feedback very carefully and work on all the known problems as much as possible, while not forgetting to prepare new and interesting content.

We will inform you about the upcoming changes in advance so that you can discuss them before release. Right now we are preparing a roadmap for the development of the project for the near future, which will soon be shown to you.