Factions - Part I - with developer's answers 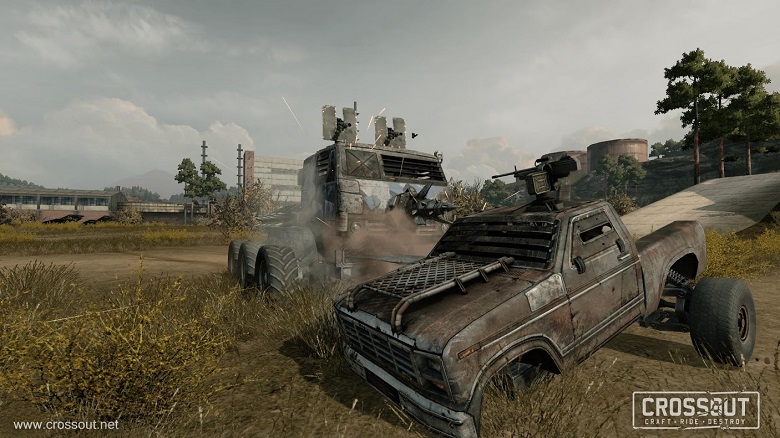 Today we are going to look at some factions and this new system, that has only been available since the 3rd Battle-test. Note that the game is in active development and does not represent the final quality and may be liable to change.

The first factions will involve Scavengers, Traders, Lunatics and a number of Engineers who are open-minded individuals who greet everyone equally.

Upon entering a faction a player should earn reputation, which currently is only gained in combat. While getting experience from battles, a player also improves his standing with his faction, unlocking new parts, accessing new blueprints, missions and storage space. 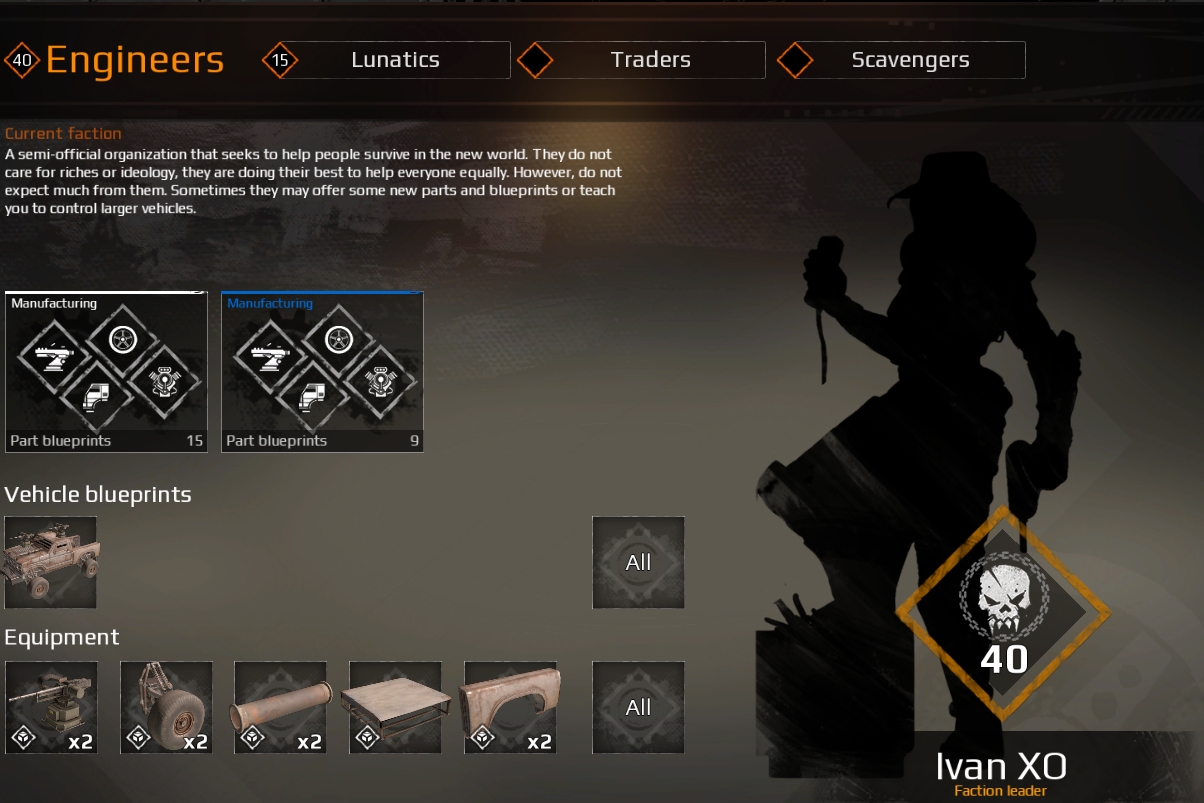 A faction of straight-handed altruists, these outcasts from other factions strive to help others survive in the harsh world of today. They don’t crave riches nor are they driven by ideology, they help everyone equally.

By demonstrating your worth and gaining reputation you can access these parts:

Equally adept at salvage and creation they are able to construct virtually anything you can find with scrap alone, while those deserving get rare armament and equipment for reasonable prices.

Keen to help, they are adept at making everything good and sturdy. Sometimes even too sturdy, but that’s for the greater good you know.

Any blueprints they share with newcomers are full of ingenuity and affordability, here are some of them.

Their help is invaluable early on, but if you want more sooner, then you may want to look at other factions. 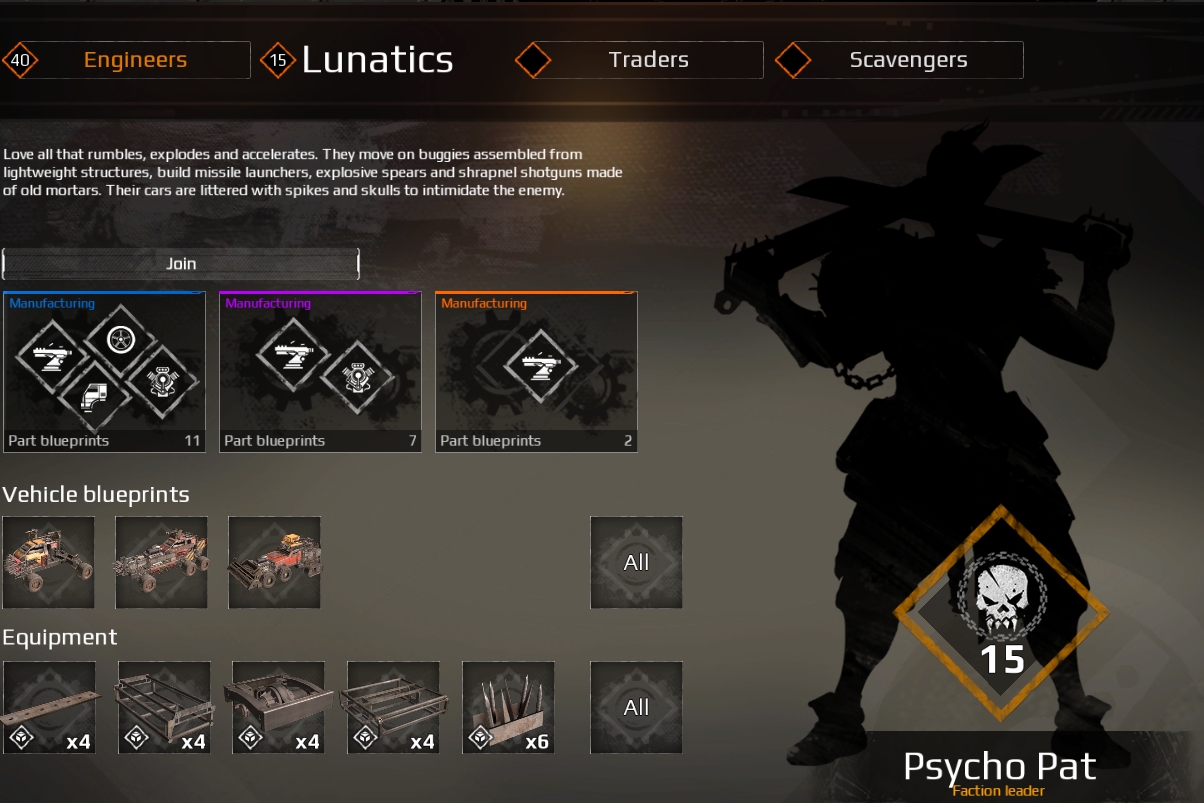 Mad raiders, hound dogs of chaos. After the cataclysm, when human nature began to change, for many people it had a huge psychological impact, which they did not survive mentally. Throwing off the shackles of civilization, they found refuge in the animal part of their own nature, where the strong devour the weak, where individuals join feral packs led by pack leaders, they have rejected the concept of morality completely succumbed to their natural survival instinct.

These bad boys, representatives of the elite factions, love explosions, everything that sounds like explosions, going fast and what is used to become fast faster. moving with agility in their armoured vehicles which are gathered from lightweight parts, makeshift shotguns from old grenade launchers, rocket launchers and explosive spears. They decorating their vehicles with spikes and skulls just so their enemies run in fear.

As always, if they think you are worthy they will help you become the pinnacle predator by providing some faction-specific parts.

If that is not enough, they are willing to share blueprints of fast and explosive vehicles. Here are some of them:

Despite their general lunacy and a hierarchy based on pure ruthlessness these guys are very crafty individuals producing ingenious weapons and devices out of broken parts and rubbish, if you show your worth - they will assist you in the jungle of the new world.

Lunatics are the frantic and aggressive fighter’s best friends, as those preferring to take it easy surely won’t last long in their ranks.

Next time, we will discuss the factions of traders and scavengers. Send your questions to the developers about the first two stats and get the answers to the most important ones. Note that your questions should be constructive and clear.

Those who have submitted the most interesting questions will receive invitations to the Crossout Battle Test!​

Can you only choose one faction or are you able to choose one main faction and research the others too?

Engineers is a main faction in which a survivor will stay forever. But you can become a member of other organizations as well.

Are there any special weapons or parts that only one faction has? What are all the advantages of joining a faction?

Joining a faction allows you to craft unique parts which can be produced only at its workbench. But once the craft is finished you can use the produced parts even after leaving the faction.

Will be there any bonus for all factions like for example +5% to speed with lunatics or +5% of defence for engineers?

It is one of our long-term plans. We are going to add plenty of bonuses and perks which will be acquired by a survivor while leveling in one faction.

Can you join multiple factions?

Only one faction of Engineers can tolerate its members joining other factions. Lunatics, Traders and Scavengers have very strict rules in regards to their members. Joining another faction is possible 24 hours after being accepted by the current one.

Discuss on the Forums