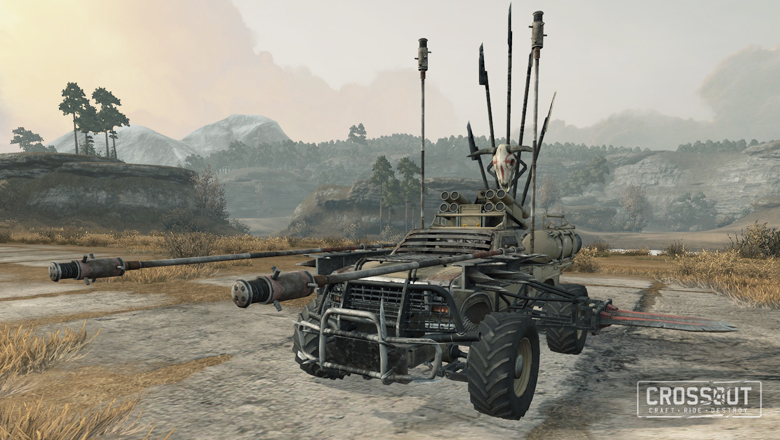 We continue our tour around the Crossout universe. As you may remember, the main topic of the last blog was the vehicle stats. The numbers which every survivor should revise before letting your imagination fly in editor mode. In the previous issue of the Devblog we reviewed the stats of TEC, Energy and Structure.Today we will discuss Mass, Power, Acceleration, XP bonus and Parts condition.

Probably the easiest for perception stat, which everybody learned at school in their physics lessons. A vehicle’s mass will significantly affect its handling. The value of this stat determines skidding, ramming strength, braking, etc.

The engine’s power affects a vehicle’s dynamic characteristics. The more powerful the engine is in relation to the vehicle’s mass, the higher the maximum speed will be - up to a certain cap as defined by the cabin. At the same time, the handling of a vehicle with a good power-to-mass ratio will be much easier. The cabin defines the ride’s stock engine, but players can add auxiliary engines as well as fuel tanks to increase power.

This stat is calculated directly from the power-to-mass ratio and affects your vehicle's speed gain. It is natural that heavier and less powerful rides would take a lot more time to reach their cruising speed, while smaller and more powerful ones may literally take off immediately. You should note, however, that every cabin will affect the time/speed curve differently. For instance, the heavy duty “Kamaz” behaves differently from the agile “Buggy”.

Experience gained in battles can be increased. This bonus can be obtained by attaching some speakers, skulls and other decor parts on your wagon. However this number is not limitless, the maximum value is defined by the cabin. Each cabin has a different maximum possible XP bonus.

In tough battles in the Crossout post-apocalyptic world, some parts of you ride can get damaged or worn out. This menu tab will allow the player to monitor their condition. It helps to see the durability of all the parts on a player’s vehicle. If needed the player has an option to repair the damaged or worn out parts, to replace them with a similar one or to purchase them on the market.

Are there any plans to implement some form of armour into the game? I.e. parts that can negate damage somehow?​

Yes we have some plans to implement armour which is going to be either damage resistant or have minimal damage penetration.

Is there an "auto-repair" feature so you don't have to find the worn out part and replace it every time it wears out?

At this stage of development this feature is not available, though there is a very convenient feature to replace all worn out parts with integral ones from storage with a single click.

Decoration (for XP bonus) - will they be only available for real money or will these become "normal" parts?

These types of parts are available through the regular loot and in-game trade with players.

If a part is worn out, can we take it into battle, or do we have to fix it before venturing into combat?

Having completely destroyed parts does not prevent players from taking part in battles. However, such parts can sustain only a minimal amount of damage in combat, and the player will have a smaller amount of experience for each battle.

You said that ‘structure’ could be compared to your cabin's HP. So a player can mount a cabin with 100 structure at the front and increase its HP to 200 by mounting 5 parts with 20 structure points each? Even if the additional items are in a completely different place than the cabin, and do not clearly shield it from enemy fire? Does it make sense to surround the cabin with armour, or can you protect it just as well by mounting modules pretty much anywhere?

That's right, even if the parts are not installed in close proximity to the cabin, they will increase its structure. However, if the cabin has no parts surrounding it, it receives all of the incoming damage, which greatly reduces the player's chances of winning. When designing an armoured vehicle, players should observe a certain balance between parts responsible for cab structure, and parts protecting it from damage.

Is wear constant for all parts or does it depend on damage received in battle? Does rarity affect wear? Is it possible to increase a part’s resistance to wear?

The game has both destructible and indestructible parts. Wear on the latter depends on the player's participation in battles. Parts wear out only when the team is defeated. If you win, the part's wear is not affected.